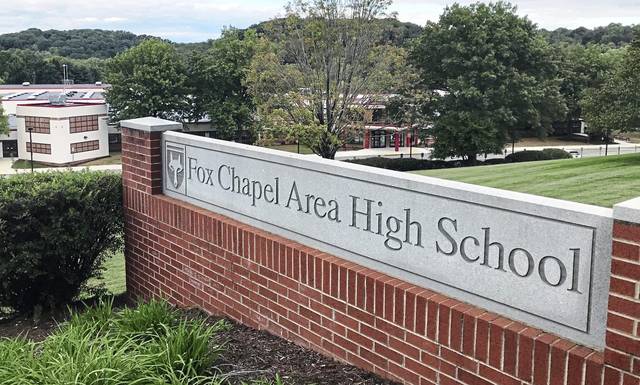 Fox Chapel is a borough in Allegheny County, Pennsylvania, USA, and is an affluent suburb of Pittsburgh located 6 miles (10 km) northeast of downtown. While many regions throughout the United States boast their share of affluent towns, Fox Chapel remains in a league with the select few: the borough continually garners national prominence and is home to many of the wealthiest and most powerful patriciate families in Pennsylvania.[3][4][5][6]

In the 1750s, the Seneca Indians lived in the region. Until the late 18th century, American Indian tribes hunted and fished in the general Fox Chapel area. Virginia and Pennsylvania both claimed the territory. The dispute was not resolved until after the Revolutionary War.[1] Today, less than 1% of its population is Native American.

It is probable that in December 1753, George Washington, accompanied by Christopher Gist, pushed his way across Fox Chapel land as he came south from Fort Le Boeuf where he had delivered a letter to the French commander, ordering him, in the name of the Governor of Virginia, to return to Canada.[2]

For the next 10 years, all the land at the forks of the Ohio River was the subject of contention between French and British. Indian allies of both empires fought settlers for control of the region. French soldiers built Fort Duquesne on the site of a former British outpost at the forks of the Ohio in 1754, and four years later British troops replaced it with a fort of their own, Fort Pitt. The bloody battles of Braddock’s defeat, Bushy Run, and Colonel Bouquet’s relief of the Indian siege of Pittsburgh provided many British and Virginia scalps, which were triumphantly brought home to adorn wigwams situated in what is now Fox Chapel. The Revolutionary War, too, produced further military activity.

Through this warlike panorama moved the Seneca chief, Guyasuta, closely associated with the district, involved in every clash, sometimes aiding the British and sometimes the French. He first appeared as George Washington’s guide during his journey from Logstown to Fort Le Boeuf in 1753. Guyasuta led the Indians against General Grant in 1758. He was probably the leader of the Seneca band that destroyed Fort Venango in 1763, butchering the entire garrison. He was in a band of warriors that burned the frontier village of Hannastown, north of Greensburg. He was also at the Battle of Bushy Run, where the Indians were defeated by Colonel Bouquet.

Despite Chief Guyasuta’s violent history, General O’Hara furnished a cabin for him on O’Hara’s estate north of the Allegheny River (now Fox Chapel), and provided necessities during the declining years of his life. He died about 1800.

The first white settler in the area was James Powers, who arrived around 1790.[3] The first schoolhouse was on Squaw Run, where it stood in 1806. It was a log house. A church was organized in 1818 on Kittanning Road, on a branch of Pine Creek.

Among the early landowners was James O’Hara, a Revolutionary Army general and prominent Pittsburgh businessman. During the depression of 1818, he was saved from financial ruin by the counsel of James Ross, a noted lawyer and former senator. In exchange for his help, O’Hara gave Ross 1,700 acres (7 km2) of land, which is now part of Fox Chapel, and comprises the Delafield Estates section of the borough, as well as the development along Buckingham Road known as the “Ross Meadows Plan of Lots”.

In general, there was little growth or development throughout the 19th century, and it remained for the 20th, with the advent of the automobile, for Pittsburghers to become aware of the advantages of the Fox Chapel District as a suburb.[4] The Pittsburgh Field Club opened in 1882, and the Fox Chapel Golf Club opened in 1919. Shady Side Academy opened its senior school on property that was formerly two large farms, a gift from prominent Pittsburgh industrialist Wallace H. Rowe, in 1922. A nearby private estate, built in 1928 by steel industrialist James E. Lewis, became the Academy’s standalone middle school campus in 1958.

Fox Chapel was originally part of O’Hara and Indiana townships. In 1928, approximately 40 landowners assembled at Shady Side Academy and voted to incorporate the Fox Chapel District Association. The matters of immediate concern that they addressed were fire and police protection. As time went on, the District Association named roads and handled development and zoning. However, by 1933 the District Association had grown concerned that its interests were at variance with those of both townships, and a petition was filed to allow the formation of a new borough. Despite vigorous opposition by both townships, on August 3, 1934, a court ordered the incorporation of Fox Chapel Borough from 6.8 square miles (17.6 km2) of O’Hara Township and 0.4 square miles (1.0 km2) of Indiana Township. Over the years, other residents adjacent to the borough petitioned the council for annexation, increasing the area of the borough to approximately 8.5 square miles (22.0 km2).

Its wooded hills and uncrowded residential developments are a regional asset. It strives to preserve openness and spaciousness in the midst of urbanization and industrialization. [5]

The name “Fox Chapel” comes from John Fox, who emigrated from Germany in 1831 and farmed the land around the present Faith United Methodist Church until his death in 1889. Shortly after his death in 1889 his daughter, Eliza Fox Teats, donated some land to the Methodist Protestant Church for a chapel to be named in honor of her father.[6]

Fox Chapel is home to Shady Side Academy, a co-educational independent college preparatory school. Shady Side Academy operates on four separate campuses— a junior school which offers private education for pre-kindergarten, kindergarten, and grades one through five known formerly as Fox Chapel Country Day School,a middle school for grades 6–8, and a senior school for grades 9–12. Shady Side Academy has operated in Fox Chapel since the early 1920s, when it relocated its upper school from nearby urban Shadyside within the Pittsburgh. The middle school campus was a later addition, the result of the Academy’s 1958 purchase of the former James E. Lewis estate, built in 1928.[9] Both campuses and their playing fields are located in the vicinity of the Pittsburgh Golf Club. Shady Side Academy’s fourth campus, the urban junior school, is located in the city in Point Breeze.

Fox Chapel Country Day School which is now part of Shady Side Academy, offers private education for pre-kindergarten, kindergarten, and grades one through five. The Fox Chapel Chabad Community Hebrew School has classes on Sunday and Wednesday and offers a supplemental Jewish education.[7]

The Pittsburgh Japanese School (ピッツバーグ日本語補習授業校 Pittsubāgu Nihongo Hoshū Jugyō Kō), a weekend supplementary Japanese school, uses the middle school facilities of Shady Side Academy.[10][11] The school, established in 1993, originated from a group of parents starting a Japanese class system in 1977.[12]

The Hillman Center for Performing Arts on the campus of Shady Side Academy presents three to seven public performances each year featuring both local and touring artists in the Richard E. Rauh Theater. These performances feature world music and culture as well as Pittsburgh artists.

The Lauri Ann West Community Center, completed in 2016, provides cultural, educational, and recreational classes in addition to camps and workshops for local residents.

Stage Right Community Theatre, is an all-volunteer organization which prides itself in having fun, while presenting quality theatre for the community. They began producing shows in the mid-1960s in the garage of a home in the Falconhurst housing plan, but eventually, the small group of enthusiastic actors moved into larger venues, including the O’Hara Elementary School, and finally the Boyd Community Center. They produce three shows each year, in the Fall, Winter and Spring.

The Fox Chapel Golf Club and the Pittsburgh Field Club offer golf, tennis, swimming, and fine dining. The Fox Chapel Racquet Club offers tennis, paddle tennis and swimming (pool rebuilt entirely in 2013) with a more casual club atmosphere. Fox Chapel residents are known as some of the most wealthy and educated in the state of Pennsylvania. The Chapel Gate Swimming & Tennis Club and the Community Swim Club are in O’Hara Township and near the border with Fox Chapel.

In 1953 a group of families living in the Fox Chapel area began to worship together at Shady Side Academy; the congregation became Fox Chapel Presbyterian Church, located at the intersection of Fox Chapel Road and Field Club Road. The Rev. Bickford Lang served as the first pastor. The congregation was officially organized in October 1953 with 339 charter members. The chapel was erected in December 1953, and worship services began to be held on the site of the present church. The church facility has grown to include a Christian Education building, atrium, fellowship hall and a Georgian sanctuary. The Fox Chapel Presbyterian Church has been led by five senior pastors since its founding.[13]

The borough has 5 acres (20,000 m2) of parkland on Squaw Run Road known as McCahill Park set aside for active recreational use. It includes two youth league baseball fields, a basketball court, and a large open field used for rugby, touch football, and soccer games, as well as a small, wooded area playground. During the winter months an outdoor skating rink is installed and is open for community use as weather permits.

The remaining parkland is nature-oriented. Those include Trillium Trail Park, which is a nature reserve that runs several miles along hills and valley of Squaw Run / Squaw Run Road, and can be accessed via several small parking lots in the valley. Squaw run passes McCahill Park and eventually flows into Salamander Park, a sizable but comparatively smaller nature space with trail-head access on Fox Chapel Road. Squaw Run and Salamander Park continue across and down Fox Chapel Road, with Salamander Park eventually blending into O’Hara Township’s Squaw Valley Park.

Regarding park-like nature spaces, the Fox Chapel Area Land Trust owns many acres of natural space outright, as well as many conservation easements around existing home structures, which lends to the undeveloped appearance of much of Fox Chapel.

Headquarters of the Audubon Society of Western Pennsylvania (ASWP) since 1976, Beechwood Farms is one of the largest nature reserves in western Pennsylvania. Its 134 acres (0.5 km2), most of which have been leased to ASWP by the Western Pennsylvania Conservancy, contain more than 5 miles (8 km) of walking trails which are open from dawn to dusk every day year-round. The area consists of woodlands, fields, streams, and a pond. Some paths are accessible for individuals with special needs.

There were 1,875 households, out of which 41.7% had children under the age of 18 living with them, 79.9% were married couples living together, 3.7% had a female householder with no husband present, and 14.7% were non-families. 13.3% of all households were made up of individuals, and 7.1% had someone living alone who was 65 years of age or older. The average household size was 2.89 and the average family size was 3.18.

Fox Chapel is the birthplace of, or home to, several notable people, including: