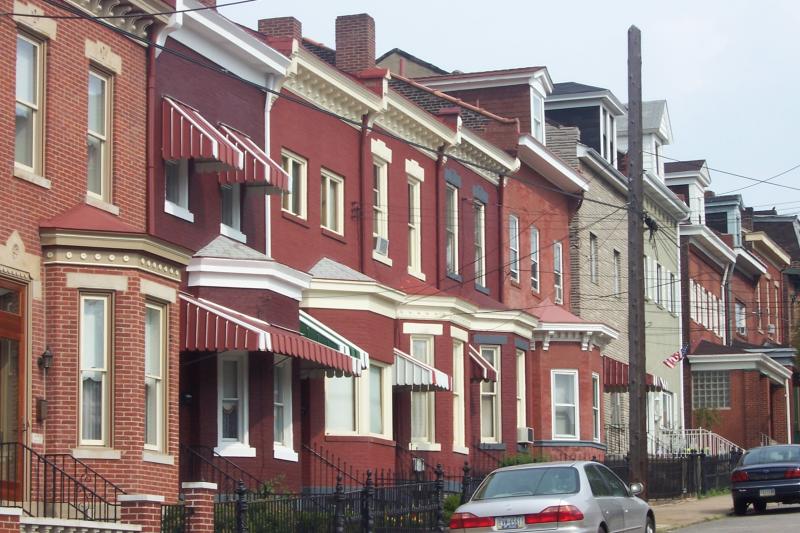 In 2019, the Lawrenceville Historic District, which encompasses the majority of the neighborhood, was added to the National Register of Historic Places.[2]

Lawrenceville was founded in 1814 by William B. Foster, father of composer Stephen Foster, who was born there in 1826. It is named for Captain James Lawrence, hero of the War of 1812, famous for his dying words, “Don’t Give Up The Ship!”[3] Lawrenceville was selected as home to the Allegheny Arsenal, due to “The area’s accessibility to river transportation and its proximity to what was then the nation’s only iron producing district”. Incorporated as a borough on 18 February 1834, Lawrenceville was annexed to the city of Pittsburgh in 1868.[4] One of the original buildings, a log home built in the 1820s, survived until July 2011 at 184 38th Street.[5]

Lawrenceville’s primary zip code is 15201, though a small section shares 15224 with Bloomfield and Garfield. The neighborhood is home to landmarks such as Allegheny Cemetery, Arsenal Middle School, Arsenal Park, and Doughboy Square. Lawrenceville maintains much of its industrial-era aesthetic, with narrow row houses and old warehouses lining streets and alleyways.

The UPMC Children’s Hospital of Pittsburgh opened a new facility in Lawrenceville on May 2, 2009, moving all patients from Oakland.[9] This addition has helped spawn Lawrenceville’s transformation, bringing new job and business opportunities to the area. The New York Times has since called the neighborhood a “go-to destination.”[10] Transplanted young hipsters and life-long Lawrenceville residents dwell side by side, as relatively affordable housing has attracted those looking to buy or renovate property.

Lawrenceville is currently a premier art, live music, and dining hub of Western Pennsylvania.[11] Butler Street is its main artery, housing a number of restaurants, bars, boutiques, furniture stores, and coffee shops. Some of the most popular dining locales include Industry Public House, Coca Cafe, Piccolo Forno, and the Church Brew Works, a brewery created from an old church on Liberty Avenue. In addition to food, drink, and retail, Lawrenceville is also home to Arsenal Lanes,[12] a longstanding bowling alley with a full-stocked bar. In 2014, Row House Cinema[13] opened up on Butler Street, a movie theatre that showcases popular classics and serves craft beer at the concession stand.

Lawrenceville’s nightlife scene has grown tremendously in recent years, as residents of surrounding neighborhoods and suburbs flock to bars and music venues. In 2015, the Moose Lodge at 242 51st street was transformed into Spirit Lodge,[14] a multi-purpose venue with two bars, two dance floors, a main stage, and a pizza parlor. Opened by former employees of Brooklyn’s Roberta’s Pizza, the venue has become a hipster draw for Lawrenceville residents and visitors alike. In December 2014, Lawrenceville’s popular Belvedere’s Ultra-dive bar closed after a kitchen fire,[15] but reopened in 2016 with new renovations.

Lawrenceville hosts Pittsburgh’s annual Art All Night, an event for amateur artists to showcase their work in a large warehouse, open for free and to the public. In April 2016, the 19th Art All Night event was held in a new location at the Arsenal Terminal Building at 39th and Butler Streets.[16]

Lawrenceville has experienced a real estate boom in recent years. In 2007, price appreciation was the second highest in the city, after the South Side, according to Carnegie Mellon University.[17] In 2015, the Pittsburgh Post-Gazette[18] reported an increasingly high volume of developers looking to Lawrenceville to renovate properties for resale, also known as “flipping” houses, although such opportunities have become less lucrative as prices rise. Many homes now sell upwards of $200,000. As a result of this growth, Lawrenceville has been noted for its role in Pittsburgh’s gentrification: once a working-class district, the neighborhood now caters to higher-earning buyers. Increases in construction and commercial enterprise have also led to a shortage of street parking,[19] as hundreds of drivers try to squeeze their cars onto too-narrow streets.

Lawrenceville was used as a location for some scenes of the film Love & Other Drugs (2010), starring Jake Gyllenhaal and Anne Hathaway.[21]

Upper Lawrenceville has three land borders with the Pittsburgh neighborhoods of Morningside to the east, Stanton Heights to the southeast, and Central Lawrenceville to the south and southwest. The Upper section runs adjacent across the Allegheny River with Shaler Township.